Every Tuesday morning from 11:15 – 12:15 we teach an Experiences in Qi Gong class at Monterey Centre, Victoria B. C.

Three different Qi Gong sets are worked through each session. The three are:

This exercise is first mentioned in a text dated c 1150 A. D. It is primarily a health oriented set but can help Internal (Neijia) martial artists discover how to move in an Internal manner.

I was taught this set by three different instructors and corrected over a period of two days in Beijing by Grandmaster Feng Zhiqiang.

Hunyuan Qi Gong is a robust set that incorporates elements of sensation, imagination and physical movement in order to move Qi. This set also builds considerable amounts of strength and suppleness.

This was the first Qi Gong set I ever learned. Taught to me by Master T. T. Liang and his student, Kuo Ao ( Stuart Olson ). This set is less robust than some but still surprisingly requires practitioners to open the joints of the body in a profound way, and to build the strength required to do so. This is a very enjoyable set and is the closest to a form (Lu) than most other Qi Gong sets.

If the session goes on for 7 weeks rather than 6 we either work through any questions and postures  a student requests or work on my current Go-To set, Re Shen Gong.

This set has been called Qi Gong for martial artists and I find it to be Zen like in its simplicity and complexity. The choreography of the set is unique and basic but the method of performing the movements not only informs one of how all Internal movement should be done, but calls for great coordination, strength and suppleness. A truly great set. 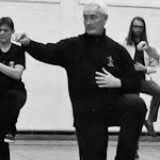 A Tribute to Master T. T. Liang and his teachings

This site uses Akismet to reduce spam. Learn how your comment data is processed.

Theme by Anders Norén — Up ↑